A few months have past since Haruka and Junichi have become a couple. During their date, Haruka asks Junichi when is he going to meet her parents which catches him by surprise. Haruka later reveals to Hibiki that she wants Junichi to propose to her during graduation day just like her British grandparents and her cousin, Jessica Morishima and her fiance did but doesn’t want to force him. While Hibiki agrees to keep it a secret, she helps Haruka make Junichi ready subtly by helping the couple roleplay pretending they are getting married, having a baby and a family dinner with Hibiki playing the role as their daughter. But when Junichi won’t answer Hibiki’s question on how he propose to Haruka, Haruka is upset during their walk home but much to their surprise, they are greeted by Jessica who has come for Haruka’s Graduation ceremony. Jessica is aware about Haruka’s plans and tells her to tell Junichi soon before graduation. 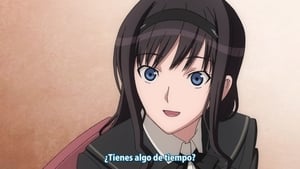