The Demon Lord Is Born!

Akuto Sai meets Junko Hattori on the train to the Constant Academy. The two make a powerful pact to make the world a better place, a pact that will mean death if broken. Upon arrival, Akuto is declared to be a future Demon Lord and the entire school begins to fear him. After his introduction in class reaches a zealous climax, a fellow student named Hiroshi Miwa looks up to him, while the rest of the class becomes even more terrified. Eventually, Akuto slips up when he volunteers for “cleaning duty”, which is slang in Constant for becoming a “cleaner,” an assassin that maintains the school secrets. This infuriates Junko who challenges him to a duel that ends with Akuto accidentally destroying the classroom in a magical explosion. His later attempts to reconcile with Junko at her dorm again launch her into a murderous frenzy, resulting in a chase through the woods. There, Akuto runs into Keena Soga mid-fight, and she resolves to protect him for personal, though unspecified reasons. She is unable to do so, and Akuto again ends the fight with another freak explosion. Immediately after, he is greeted by Korone, an “observer.” 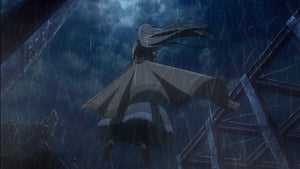