Akuto meets with the principal of Constant with Korone in tow. Her testimony absolves him of any evil intent, but the principal has ordered her to stay with Akuto as a bodyguard, and a judge of whether or not he will truly become a Demon Lord. Akuto meets with Fujiko Etou the following day, and she pledges to help him, despite his destiny. She later recommends that they meet in secret in the mountains behind the school, and instructs him on how to disable Korone. En route, Akuto and Korone are attacked by a demon dog, an animal mutated by mana. Akuto is able to absorb the creature’s mana and return it to a puppy, a feat that astounds Korone. The puppy picks up the scent of Keena, whose ability to become invisible is revealed. After deactivating Korone, Akuto rendezvous with Fujiko in the mountains, where she asks him to join the school’s Disciplinary Committee to help clear his name. As an emergency way to reconcile with Junko, she also gives him a two-shot magical gun that fires medicinal tablets, which she claims will allow the two people shot by it to understand each others’ feelings. On the way back, he is tackled by Keena, still fleeing from the puppy, and she is rendered visible (and revealed to be naked) in clear view of the now-reactivated Korone. In exchange for testifying to Korone that Akuto did not try to molest her, Keena requests his friendship, which he agrees to. At the end, Fujiko is shown contacting Junko, falsely claiming that Akuto had threatened her. Fujiko then enters a secret passage in her room, where she converses with her brother’s severed head about her plans for Akuto. 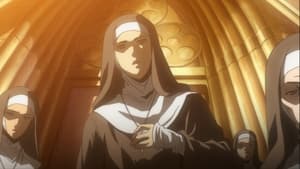