Beware of the Underground Maze

Akuto, Korone, Hiroshi, and Eiko go to the school’s underground labyrinth to find the spot on the map. They encounter a cloaked being who try to stop them with swarms of bats, but is easily defeated. Akuto digs up a plush recording device buried in a tombstone that guides them to a abandoned research facility, being attacked by an armored statue, in which Eiko finds a screen that locates a underground shrine behind a hot spring inside a cave. Meanwhile, Junko, Kena, and Fujiko make their way to the labyrinth. Junko, who fell underground into the hot spring, tells Akuto that Eiko is actually a government spy. A savage wolf comes after them, but they are saved when Ken and Fujiko arrive. Eiko, in tears after seeing him protect Junko, leaves after giving him a key from the shrine. When Fujiko activates the key, it transports them to the headquarters of the student council, who were responsible for the attacks. As it is revealed that the headquarters is really the base of the demon king, a greedy Fujiko uses the plush recording device to awaken the treasured dragon beast Peter Hausen. It is then that the dragon beast displays a record of the memories of Fujiko’s brother leading to his death, causing her to collapse thereafter. An enraged Akuto confronts Peter Hausen, soon becoming his new master, despite his wishes. 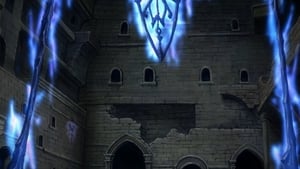