Do You Have a Crush?

Without either of their input, it is decided that an omiai is to be held at Junko’s village. Junko, who has feelings for Akuto, is unable to tell him, and so invites him to the village for other reasons. Akuto knows nothing of the marriage interview, but feels responsible for the messes he has caused and decides to go with her. There they meet Yuko Hattori, Junko’s younger sister. She is not only revealed as a pop star idol, but she bears a scar on her neck of which was bitten by a demon beast long ago. That night, Junko readies herself and visits his room, where she lets him know why he was invited to the village. This leads to another misunderstanding as several clan members chase Akuto after seeing Junko in tears. As Akuto flees, he is confronted by Eiko, who tells him that the gods have decided Kena as a threat, and orders her clan to eliminate Kena. On school grounds, Kena is saved by Boichiro Yamato, the leader of the Cabinet Intelligence Magic Office, from being assassinated. He only shows interest in making her his own to control the gods, calling her the “principle of identity”. Akuto uses his power to transport himself to the school grounds, but he realizes that Yamato surpasses him in strength. 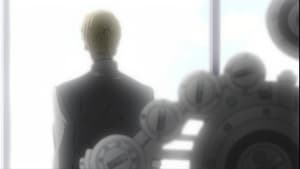