The Qwaser of Stigmata: 1x11

A frustrated policewoman bewildered by the exhortation from twin sisters that lay out an array of bondage-sadism-domination-masochism implements before eventually swamping her with mercury and tearing her torso asunder is the only warning that the Adepts are on the move yet again as Shin’ichiro prosecutes a search for clues as to where the »Tsar’s Crowning« is located unaware that the mice play when the cat is away — a lesson that Mafuyu stumbles over when she accompanies Fumika into the classroom with a bunch of handouts. Fumika objecting to Miyuri and Hana’s persecution of Mafuyu before Sasha interjects his perspective sets the stage for Fumika to recount how she has always had a crush on Sasha who somehow detects something amiss with the twin sisters accosting Fumika — aka Eva Q and Eva R. Ekaterina explains that Sasha needs to do away with the main body Eva Silver that has already taken over the classroom; while Sasha and Ekaterina exert their respective efforts, Mafuyu bides her time in preparation for a counterstrike to protect Fumika who ultimately becomes the deus ex machina for Sasha to arrive just in the nick of time; furious at Eva Silver’s cavalier attitude of humans as replaceable playthings, Sasha powers up and prepares for battle. 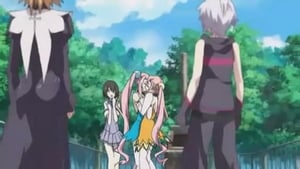