The Qwaser of Stigmata: 1x12

Undaunted by Sasha’s successful conquest of her proactive proximity precautions, Eva Silver bristles at Sasha’s challenge; a soma recharge from Fumika and a »Stop right there, sister!!!« interception from Teresa later, Sasha uses his temperature control capabilities to make quick work of Eva Silver along with the prologue of persecution directed at Mafuyu and Tomo. While Father Yuri deals with the aftermath, Ekaterina explains Sasha Eva Q and Eva R’s hasty retreat to the aid of Eva Silver. The next morning, Sasha is taken aback at Miyuri finally seeing the light as she acknowledges her culpable fallibility while Hana’s persecution of Sasha becomes the ironic admonition against complacency that sets the stage for Mafuyu’s abduction. Sasha and Teresa are shocked to find that Eva Silver was able to repair herself just enough to escape death; now with Mafuyu as a hostage and Eva Silver having upgraded element control along with the vengeance to use it, the battle begins anew. The deus ex machina that ultimately conquers Eva Silver is Sasha successfully forming the iron in his blood into a sword catalyzed in no small part by Ekaterina’s timely intercession and Mafuyu’s soma along with Shin’ichiro incinerating Eva S. 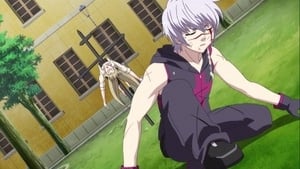