The Qwaser of Stigmata: 1x13

A Night at the Iron Spring

Sasha’s abrupt promotion to mid-level element control catalyzed by his anxiety for Mafuyu’s safety may have been necessary to conquer the Hygrargyum (Mercury) Qwaser Eva Silver; still, such an exhibition does have a hefty price to be paid. Thanks to prompt medical intercession, Sasha only ends up foregoing his iron will and his entire prologue after becoming the Iron Qwaser to end up around the psychological development level of a self-conscious and impressionable kindergarten boy. While Miyuri fumes at not being invited along before deciding to crash the party with Elizabeth, Mafuyu reminds everyone of the task at hand — a task Athos thinks is best done at the iron-laden Oppai Hot Springs. Hana’s attempted intercession on Ekaterina’s behalf, Sasha accidentally making Fumika feel bad about her chest, Tomo getting inebriated merely from smelling sake, the iconoclastic cuisine . . . none of this is any preparation for the arrival of the Athos tactician Nikuma who easily humiliates Ekaterina before leading Sasha through an a-la-carte exercise of sucking soma from Teresa along with Mafuyu, Tomo, Hana, and Fumika that ultimately backfires horribly in the form of an earthquake that spouts geysers that flood the entire hotel. 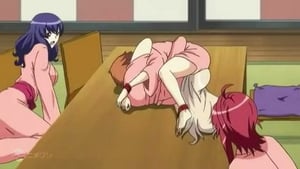