The Qwaser of Stigmata: 1x15

Mafuyu announcing the successful preparation of dinner becomes the forum for coming upon Sasha all worn out from having Tomo read books to him; while Sasha sleeping so innocently like a docile kindergarten boy with all the time in the world, Mafuyu is anguished at the prospect that the previous battle-hardened Sasha may not return for a long time. Teresa compares notes with Father Yuri about Sasha’s incapacitation and its ramifications should the Adepts decide to try their fortunes for the »Tsar’s Crowning« under the current circumstances; equally as dire is Sasha wandering off lost in his own thoughts while Elizabeth is anguished at Shin’ichiro becoming more distant with her as of late. Sasha and Elizabeth soon find that they are not blessed with the time to agonize over their poor fortunes when a blitzkrieg sniper attack by the Plumbum (Lead) Qwaser forces both Qwasers to take cover with their hostess before Elizabeth decides for a valiant but futile defense after a soma recharge whose ultimate silver lining is that Sasha is fully awakened from his estivation just in time to pervert the onslaught to the assailant’s detriment only to find that Shin’ichiro is an even greater threat than the Adepts. 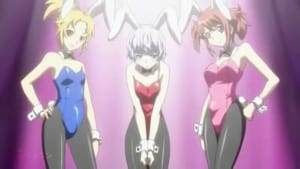