The Qwaser of Stigmata: 1x18

While meditating under a waterfall, Mutsumi Sendou reflects on her prologue as Sasha’s Maria Magdalen partner to the time when she guided Sasha through how to quickly recharge his soma during battle before demonstrating unto her Qwaser paramour Taisuku Fujiomi the fallacy of the proverb »Love has no obligation for apologies«. Meanwhile at Saint Mihailov’s Academy, the anxiety over Tomo’s uncertain status is the elephant in the room as Mafuyu grapples with the reality that the Aurum Qwaser will still wield Tomo as his avatar even if a rescue attempt were to succeed. Hana playfully deriding her affection for Sasha does nothing to prepare her for Taisuku and Mutsumi enrolling in the school as transfer students the next morning — apparently to prosecute some kind of operation for the »Tsar’s Crowning«. After waylaying her between classes, Sasha inquires Mutsumi her presence at the Academy only to have his challenge and Mafuyu’s »What the hell are you doing!?!« intercession perverted to both his detriment and Mafuyu’s before Taisuku contributes to the encounter. The student council president Yumie Hiragi delivering a stern »Keep it in the barn!!!« admonition to the pair prior to becoming the quarry of the Ouroboros Elemental Circuit ultimately becomes the deus ex machina for the illuminating Taisuku and Mutsumi’s true objective — the location and acquisition of the Sword of Maria incantation needed for activating the »Tsar’s Crowning« — the very thing Mafuyu ironically wields against Mutsumi’s seductive coercion. 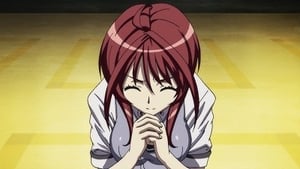