The Qwaser of Stigmata: 1x19

While Jita Phrygianos appraises Tomo prior to a procedure intended to enhance Tomo into becoming a High Maria, Sasha has figured out how to pervert the mechanics of Taisuku’s powers to his advantage before racing to Mafuyu’s rescue uninterested in Taisuku’s prologue as a Vajrapanis; a strategic retreat on Mutsumi’s part gives way to Mafuyu and Sasha wondering about the »Sword of Maria« element circuit as they compute their next move. While Ekaterina plays the consummate actress to defuse a teacher’s challenge for loitering, Joshua is shocked to find that there is no honor among his teammates when it comes to Tomo’s soma; whatever the Adepts’ volition for her, it becomes apparent that Tomo is more valuable in one piece — much to Mafuyu’s relief when Tomo sends a »Keep the faith and the home fires burning« video after her day with Astarte who is already a High Maria. Still, even with Tomo having the run of the Adepts’ hideout complete with the security detail, the Holy Aurum Qwaser ultimately sees no reason to abandon her plans and Georg Tanner clearly has plans for Mafuyu through that elemental circuit. 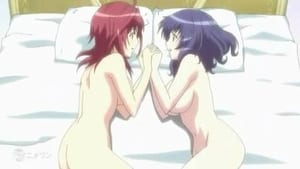