The Qwaser of Stigmata: 1x21

The circumstances continue to deteriorate as the Adepts join forces with the Ancient Regime in a sort of tenuous unholy alliance as the Holy Aurum Qwaser declares the time is ripe to advance toward the »Tsar’s Crowning«; almost if they had sensed this, Sasha and Mafuyu desperately search around for the Aquatic Sanctuary where the Icon is held only to find that there is a specific set of circumstances under which it can be found. The Hydrogen Qwaser Milk drawing a lot of attention due to her gas mask as she leads Jita Phrygianos through buying a cake in a store becomes the backdrop for Mutsumi and Tasuku to pick a fight with the two Qwasers while Friedrich abducts Mafuyu in order to avail the Sword of Maria elemental circuit within her body. Even with Hana’s syllabus of Ekaterina being abruptly missing in action, Sasha is shocked to find the irony that Ekaterina is ultimately the most dangerous adversary on the scene as she threatens Mafuyu’s life prior to the advent of the Aquatic Sanctuary; as if to rub salt in the wound, Ekaterina arrogantly decides to refuel herself with Mafuyu’s soma caring nothing that the most power she will have in the Holy Roman Empire version 2.0 is as Friedrich’s second-in-command. 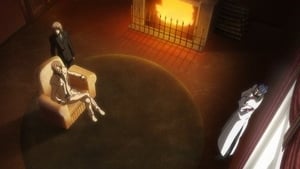