The Qwaser of Stigmata: 1x22

Almost as soon as Ekaterina devotes herself to partaking of Mafuyu’s soma, the Sword of Maria elemental circuit demonstrates the mechanics behind its immense power as Friedrich leads the charge with his brother Georg toward the Aquatic Sanctuary as he phases out with Ekaterina and Mafuyu along with two of the Adepts Qwasers certain that his subterfuge for the »Tsar’s Crowning« will pay off. Tasuku and Elizabeth volunteer to stalemate Jita and Wang Chen’s proximity injunction while Sasha intercepts the Tanner brothers as they are about to throw Mafuyu into the corrosive energy matrix surrounding the Sanctuary only to find to his horror that they are as deadly adversaries as they are devious scoundrels. The ironic silver lining in this confrontation is that the Tanner brothers’ greed ultimately becomes their own worst enemy when their respective powers going out of control becomes the forum for Ekaterina to see the light as Hana repels Friedrich’s chivalrous lechery before delivering a blistering reproof of Ekaterina’s gullibility complete with a pair of »What the hell are you using for brains!?!« slaps across the chops; Sasha successfully destroying the Tanner brothers’ combined avian form catalyzed by Ekaterina and Elizabeth’s joint efforts along with those of Tasuku offers cold comfort to the Holy Aurum Qwaser ready to claim the spoils. 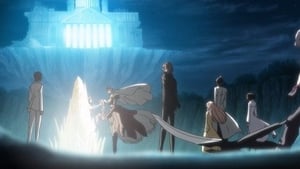