Knock Out starts to develop interest in Human illegal car racing. One day, Sierra asks Jack for that ride on his motorcycle, as Jack promised. Although, Jack tells Sierra not this time and Vince (sometimes refered to as the bully) tries to show off and give Sierra a ride. Vince asks Jack to go racing. Arcee doesn’t want to do it and Jack doesn’t take the offer. Until, Vince talks about how “ugly” Arcee is. Arcee gets angry, and tells Jack to tell Vince it’s on. Later that day, Vince and Jack go racing. Jack ultimately beats Vince. When, Arcee and Jack return to Autobot Base, Raf and Miko tell Jack that everybody at their school knows about Jack and Vince’s race. The next day, Vince asks Jack to go racing again, Jack doesn’t want to, but he eventually takes Vince’s offer. Arcee disagrees with Jack, and doesn’t go. So, Jack asks Raf if he came borrow Bumblebee. That night, Jack and Vince enter a illegal car race. But, Knock Out enters too and he tries to terminate Bumblebee. Bumblebee does some crazy things and Vince is amazed. After losing Knock Out, Vince goes up to Jack and asked him what just happened. Until, Knock Out anciently thinks Vince is Bumblebee’s Human friend, so he kidnaps Vince, right in front of Jack and Bumblebee. Bumblebee calls for backup, and Arcee, and Bulkhead come to help. As, the Autobots track down Knock Out, and battle him. Knock Out escapes. Meanwhile, Optimus wonders where the others have gone, and asks Miko, and Raf. They act like they don’t know anything, but Optimus finds out. So, Optimus makes an appearance to stop Knock Out, succeeds. Later, Knock Out returns to the Nemesis, and Starscream gives him a punishment, after not obeying his orders. Jack and Bumblebee drop Vince off at his car. The next day, Sierra asks for that ride again, and Jacks says no. But, Arcee feels bad and lets Jack let Sierra have a ride. 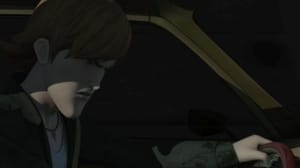