Following from the events of the previous episode, Agent Fowler is sat down to explain recent events to his superior, the cynical and disbelieving General Bryce. Threatened with a military tribunal and Team Prime’s termination, Fowler tries to convince the General that the Autobots are still on the military’s side, but the General believes that Optimus Prime went rogue and has perished, failing to fully understand that Nemesis Prime was not the real Optimus. 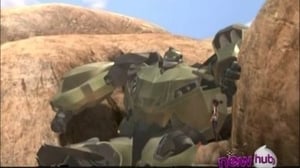