Popura and Aoi try to help Mahiru train to cure her androphobia by dressing her up as a guy, but with no such luck. Later, Sōta and Mahiru start exchanging text messages, which causes Izumi to worry. Sōta also runs into Kirio, who manages to deduce that Mahiru has feelings for him. Later one night, Aoi gets locked out of the restaurant, but Jun manages to sort things out for her. Later, Popura and Aoi try to help out Mahiru’s progress by exposing her to the other men, only for her to nearly end up punching Hiroomi. Meanwhile, Popura becomes elated when she is finally able to reach the broken items report sheet that was normally out of her reach. 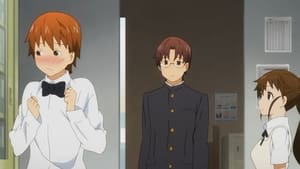