Mahiru meets a boy calling himself Kirio Yamada, who she believes might be Aoi’s brother. As he is able to withstand her punches, Mahiru ends up conversing well with Kirio, who starts developing feelings for her, but Sōta becomes downhearted when he sees the two getting along. He begins acting strangely the next day and ends up bashing his head against the wall, leading him to think he might’ve become a masochist. Later, Kozue manages to get the waitresses to dress up in animal cosplay. 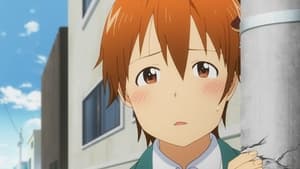