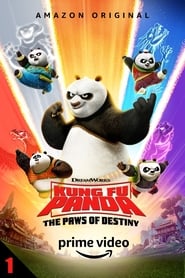 Kung Fu Panda: The Paws of Destiny follows the adventures of four energetic panda kids: Nu Hai, Bao, Jing, and Fan Tong. When the friends stumble upon a mystical cave beneath Panda Village, they have no idea they’re about to absorb the chi, or energy, of ancient kung fu warriors known as the Four Constellations. Now it’s up to them to save the world from an evil force — but first, Master Po must teach them how to use their newfound powers. Based on traditional Chinese astronomy, the Four Constellations — Blue Dragon, Black Tortoise, White Tiger and Red Phoenix — are said to have been the first warriors to achieve total mastery of chi. A few millennia ago, the masters used their powers to defeat their corrupt teacher, Jindiao. Worried their good chi couldn’t exist without a powerful dark chi to balance it out, the masters then sealed themselves into an underground temple to keep the world safe. Little did they know that Jindiao lives, albeit in the new body of a vulture. If Jindiao can absorb the Four Constellations’ chi and restore himself to his true form, the world will be in grave danger.