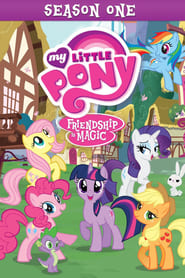 The first season of animated television series My Little Pony: Friendship Is Magic, developed by Lauren Faust, originally aired on The Hub in the United States. The series is considered to be the fourth generation of the My Little Pony franchise, following earlier lines and television show tie-ins in the 1980s and 1990s. The series premiered on October 10, 2010, on The Hub, an American pay television channel partly owned by Hasbro. The show follows a studious unicorn pony named Twilight Sparkle as her mentor Princess Celestia guides her to learn about friendship in the town of Ponyville. Twilight becomes close friends with five other ponies: Applejack, Rarity, Fluttershy, Rainbow Dash, and Pinkie Pie. Each represents a different face of friendship, and Twilight discovers herself to be a key part of the magical artifacts, the “Elements of Harmony”. The ponies share adventures and help out other residents of Ponyville, while working out the troublesome moments in their own friendships. Hasbro selected animator Lauren Faust as the creative director and executive producer for the show. Faust sought to challenge the established “girly” nature of the existing My Little Pony line, creating more in-depth characters and adventurous settings, incorporating Hasbro’s suggestions for E/I content and marketing of the toy line.