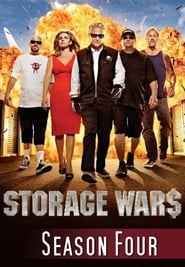 The fourth season of the reality television show, Storage Wars aired on A&E from April 16, 2013 to July 2, 2013. It consisted of thirty episodes, beginning with the episode “The Big Boys vs. The Heavyweights” and ending with the episode “Super Bros. Shuffle”. This season of Storage Wars had more frequent buyers than the other seasons. There were lots of new buyers on the show. All of the episodes this season were filmed at various self-storage facilities throughout Southern California, including Mini-U Storage, Storage Outlet and Extra Storage.